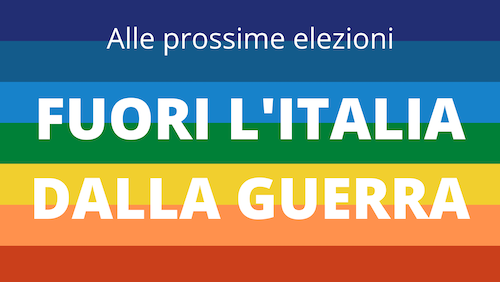 Since the beginning of 2022 we have entered a new phase of world history, characterized by what Pope Francis has called the piecemealworld war, of which the Ukrainian war is the center. The war is being fought on different fields. One is certainly the military one, but the conflict also involves economy and finance (sanctions and war economy), ideology, and culture, concealing the violent international competition launched by the US against emerging countries, cloaked by the slogan of the “clash between democracy and autocracy”.

Being the result of the end of the unipolar world, this new phase can lead to a progressive result: the recognition and acceptance of multipolarity, promoted by a group of countries proposing peaceful coexistence, win-win cooperation, and respect for the systems and history of each country. Promoters of this vision are above all the BRICS (China, India, Russia, South Africa, Brazil) and their related countries, working on the construction of a world and rules capable of looking at the general interest of humanity.

However, the progressive result is not the only possible one, on the contrary. Today the West seems to have taken the road of a reactionary and extremely dangerous result: interventionist and bellicose fractions are growing in the Italian bourgeoisie in support of the permanent war that US imperialism, a waning economic power, fuels in the anachronistic attempt to maintain unipolar domination and to stop history in its tracks.

2. War is the main issue of our time

During the Draghi government Italy has pursued the regressive outcome, adopting the most extremist line among the founding countries of the EU, choosing – at any price – to wage a long-lasting and all-out war against Russia, with the indispensable objective of the full “victory of democracies” and the defeat and punishment of autocracies. Italian government is sustaining this policy even after its resignation, despite being in office only “to handle current affairs”.

In the foreseeable future we expect a new escalation aiming to a war against China. For some sectors of the Atlantic ruling classes, a definitive stage has begun, featured by war as a structural element of the present and the future.

War is the main problem today: all other political, economic, social and institutional choices. During war economy becomes a war economy: environmental or welfare policies are totally sacrificed to war, reallocating resources from social to military spending. This strategy is being carried out, even though its price is increase in poverty, deindustrialization and heavy new social exclusions. Finally, war justifies a state of emergency, the transformation of institutions, the transition to an authoritarian state, granting the government full powers. Even now the Constitution is heavily distorted: Article 11 states that “Italy repudiates war as an instrument offending the liberty of the peoples and as a means for settling international disputes”; furthermore, the sections about social and labor rights are disregarded. In addition, participation and political choices are reduced both on the public and political level, and on the trade union and social level. The creation of a presidential regime is not a remote option.

It is therefore essential to put the question of war at the centre of the electoral campaign. The choices of the Draghi government and the majority of the current parliament ignore the will of the vast majority of the Italian population, whose sovereignty is trampled upon by an alignment with the hawks of Atlanticism and NATO and whose voice finds no echo in the parliamentary halls, except for a minority of meritorious parliamentarians, to whom we address our thanks.

Let Italy get out of the war! is the password that will have to characterize not only the electoral campaign but a necessary mass campaign, which must continue in the coming months.

In the first days of convulsive electoral campaign the issue of war remains in the background (or, at best, is kept at the same level as other issues) when comparing the political agendas of the majority of the political formations at the elections. The war seems to have disappeared from the general attention, perhaps because, in contrast to the triumphalist tones of recent months, the news coming from the Ukrainian front does not fit the regime propaganda to which Italy has been exposed night and day for months.

Italian media try to represent the forthcoming elections as a choice between a pole led by the Democratic Party and a second one led by the right-wing party “Fratelli d’Italia”. Actually, it is a false bipolarity between two formations that, although expression of different political cultures, have clearly chosen to place themselves at the heart of Atlantic extremism, representing in fact two fractions of the Atlantic one-party. Precisely this substantial basic homogeneity pushes an increasing slice of the electorate to abstain, because citizens find difficult to see an alternative policy to the one that, at any social and political price, took the position of the Atlantic war extremism. There is an evident difference with the past and with the history of Italian foreign policy, which was capable, even during the Cold War, of relations with the countries of the third world and with the USSR.

The real issue, for the next elections, is how to ensure that in the next parliament there will be a real opposition to the famous “Draghi agenda”, which represents the submission of politics (and Parliament) to supranational decisions, taken against the general interest of the country.

For these reasons, the Marx21 Association had hoped that the single party of Atlanticism would be opposed to the “party of peace”: a broad front of forces that would pose the question of the exit from the war and Italian neutrality, as a central element of its political proposal. It is now evident that this front will not present itself in the elections in the form of a coalition; nevertheless, precise commitments and will emerged to oppose the war system in which Italy is inserted. Marx21 therefore turns to all those who work in this direction and, albeit with different accents, are in tune with the aspirations of the majority of Italian people. We ask them to commit to a strategic initiative so that the Italian position moves toward those forces that work in the world for peace and against war. We are aware that it will be an arduous and long-term battle, but there is no other way. If we do not take Italy out of the mechanism of war, no redistributive policy, no investment and no role will be possible for our country in the world. Bringing Italy out of the war system is the only way for politics to return to a role of choice and direction of strategic decisions and to seize our destiny back.