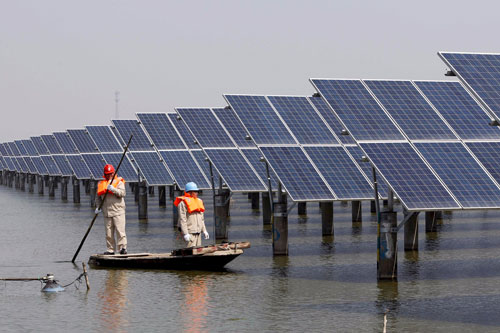 The 1.4 billion people of China are the main energy consumers of our planet, with 23.6% of total energy consumption. The United States, with 330 million residents, account for 16.6% of global consumption but record a newsworthy 3.5% rise – the largest increase in consumption since 1984

According to the data provided by the BP Statistical Review 2019, global primary energy consumption reached 13,865 million tons of oil equivalent (Mtoe) in 2018, increasing by 2.9% in comparison with 2017. It is the highest increment that has been registered since 2010, of which more than 40% was drawn by natural gas.

At the same time, China confirmed its world energy consumer leadership with 3,274 Mtoe, equal to 23.6% of global consumption (+4.3% year-over-year). The United States of America followed with 2,301 Mtep, equal to 16.6% of total consumption (+3.5% y-o-y, the highest growth since 1984). However, China has a population of more than 1.4 trillion inhabitants, while the U.S. have approximately 330 million citizens.

In succession, the 2018 global energy mix:

In order to understand the matter at hand, it has to be highlighted that the new geographical redistribution of the manufacturing activity, which has been contemporary taking form to the detriment of some countries and in favour of other countries, was accompanied by a strong natural gas demand growth – +5.3% in 2018, equal to 200 Gm3, the maximum increase since 1984 (U.S. +80 Gm3, China +44 Gm3, Russian Federation +23 Gm3, Iran +16 Gm3). Especially, for the first time ever, gas demand was drawn by the industrial sector more than power generation as has happened in the previous decade.

From 2011 to 2018, U.S. energy dependence rate – which is the ratio between annual primary energy import and annual primary energy consumption – strongly decreased from 20% to 8% thanks to the fracking technique, which boosted the extraction of tight oil and shale gas in North America. At the same time, the Russian Federation strengthened its net energy export leadership, which increased from 88% to 101% of its primary energy consumption. On the contrary, China increased its foreign energy dependence, which surged from 6% to 19.4%.

In regard to the evolution of the Euro-Russian gas infrastructure system, Rainer Seele, head of the Austrian major OMV, one of the most important European investors in the Nord Stream II pipeline, explained that the first natural gas flows will start not later than December 31st 2019. At the moment, 70% of the pipe lay, which will connect the Russian Federation with Germany through the bottom of the Baltic Sea, has been realized. “The construction works are continuing according to the plan. We see no time delay. We are planning with the first gas by the end of this year, so at latest December 31st. The pipes are all on the site, and we have only 30% of pipe lay activities left”, stated Seele.

As regards the Euro-Asiatic gas infrastructure system, “supplies through the Eastern Route should start before the end of next year [2019]. The initial volume will be 5 Gm3 that will reach 38 Gm3 before 2024”. Taking into account that on June 2018On February 27th 2019, 99% of the construction works related to the Power of Siberia pipeline (Eastern Route), which will bring gas to eight provinces located in the North-East of China (included Beijing), were finished. Furthermore, it must be taken into account that in June 2018, for the first time ever, a Russian vessel loaded with LNG arrived in India.

In the forthcoming future, it must not be excluded that gas supplies will be paid in yuan and rubbles instead of U.S. dollars. At the moment, “40% of the Russia-China trade deals with natural resources (starting from oil and gas). As a matter of fact, the amount of Russian export to China carries out in euros has been increasing to the detriment of U.S. dollar. In particular, at the end of 2018, 37.6% of the total Russia-China trade was in euro. This share, that is still surging, is eroding the dollar leadership as it has ever happened before” wrote Fulvio Scaglione, former director of Famiglia Cristiana”.

Based on the Drilling Productivity Report figures issued by the Energy Information Administration on July 15th 2019, the American unconventional crude output is estimated to increase by 49,000 b/d to 8,546,000 b/d in August 2019.

Thanks to the statistics provided by Baker Hughes on August 9th 2019, the 934 current U.S. active rigs, of which 764 (81.8%) are oilrigs and 169 (18.1%) are gas rigs + 1 miscellaneous (0.1%), were 29 less than July 3rd 2019, the lowest level since January 26th 2018. On July 12th 2019, Bloomberg highlighted that the promise of the Permian is shrinking and the constraints are manifold, but the most consequential is that shale well production falls off at such a high rate – as much as 70% in the first year – that you need to keep spending cash on new wells just to maintain output. According to Janus’s Barrett “U.S. production in absolute terms will continue to grow”, he said. “But the pace of production increases will slow”.

On July 11th, both qualities reached their monthly high – respectively pricing $67.58/b and $60.84/b – due to the fall in U.S. inventories, which dropped from 468,491,000 barrels on June 28th to 458,992,000 barrels on July 5th. Furthermore, hurricane Barry hit the Mexican Gulf simultaneously, decreasing the oil output in the region by more than 600,000 b/d, approximately one third of the entire Gulf production.

On July 18th, both the European and Asian benchmark, and the American grade lowered to their monthly minimum, respectively trading at $61.66/b and at $54.79/b, due to fears that global oil demand growth will slow down in the second half of the current year.

During the last ten days of July, barrel prices increased again as a consequence of three concomitant factors:

– The rising tension in the Persian Gulf, from which transit 18,500,000 b/d of oil and petroleum liquids;

– On July 31st, for the first time since 2008, U.S. Federal Reserve cut its interest rates by 25 basis points, bringing them in the range 2-2.25%, with the aim of supporting U.S. economy thus, global oil demand too.

However, especially from a geopolitical point of view, the fact that the Sino-Iranian energy cooperation is still in place is a fundamental issue in order to maintain the current barrel price stability.