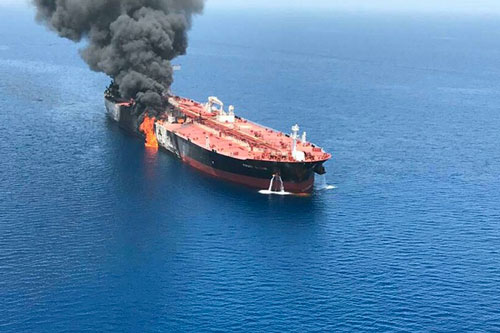 The renewed tensions in the Persian Gulf exploded with the burning of two oil tankers (one Norwegian and one Japanese) and subsequently with the shooting down of a US drone by Iran. The US promptly accused Tehran of both the responsibility of the attack and of having shot down the drone in international airspace. This sequence of events fell at a particular time while the Japanese Prime Minister, Shinzo Abe, was in Iran. It was the first time that a head of the Japanese government visited the Islamic Republic. The goal of this visit was to mediate with the United States after their exit from the nuclear deal, on which Trump had expressed harsh criticism already during the election campaign.

The White House policy might seem contradictory when it opens to dialogue with North Korea and agrees to stabilize Syria (closing with the season of more or less direct support for Islamic terrorism), exacerbates and radicalizes the position towards Iran.

How can we explain apparently contradictory choices like these? The answer can only be found by broadening our gaze to the whole area, marked by the conflict between Saudi Arabia and Iran. The two countries are fighting on several fronts: Yemen (where a war ignored by the West is wasting human lives), Lebanon and Syria. This clash overlaps with what in the world sees the United States on one side and China and Russia on the other.

The wars of Bush and Obama, far from bringing the benefits hoped for to the US deliver a world situation in which China continues to grow, a regional situation in which Russia has become a protagonist and Iran has strengthened. As far as the Islamic Republic is concerned, favorable conditions have been created in Iraq and in Lebanon, which have led Vali Nasr to speak of ‘Shia revival’, a correct definition if one captures the political value of the same and does not stop at an opposition religious.

The Shia in Iraq as in Lebanon are characterized by the defense of the Fatherland with an objectively anti-imperialist role, emblematic of the role that Hezbollah (but it is reductive to consider this only a Shia movement) carried out in 2006 during the Israeli aggression.

Thus a regional axis linked to a world scenario is outlined, the role that Iran plays in the SCO and the positive relationship it has with China is not casual. In Syria this alliance was strengthened to defend a sovereign state and not to build a caliphate (which was the goal of the Islamic state).

The victory gained thanks to the Russian intervention was recognized by the new trumpian course which abandoned Obama’s choices. The US project blessed by Hillary Clinton, saw Saudi Arabia (and other Gulf monarchies as of the United Arab Emirates) as the financier, Turkey as the logistical base and ISIS as labor, a scheme which closely resembled what was used against the USSR in Afghanistan and which represented the pro-western Sunni counteroffensive.

Trump took note of the defeat, at the same time he wanted to give a reassuring signal to both his allies in the region (Israel and Saudi Arabia), and to the Israeli lobby which, together with Netanyahu, had supported him during the electoral campaign. He gave this signal by hitting Iran, with the abandonment of the agreement on nuclear power and with sanctions. This choice, which apparently brings together the entire US establishment and the allies, hides great divisions.

Two positions are confronted on Iran. Bolton, within the Trump Administration, is the hardest towards the Islamic Republic, in favor of a change regime. The same can be said for the Saudis, who hit Qatar with sanctions precisely because, among other things, considered too condescending to Tehran. Trump is instead in favor of an agreement, he would like to do with Iran what he is trying to do with North Korea: to make a pact more advanced than the previous one (from the US point of view), able to reassure the allies, starting from Israel.

As it was written in an ‘ilpost.it’ article, ‘the US government has repeatedly said it wants to rewrite the terms of the nuclear agreement heavily, including sectors that had been excluded in the 2015 text and pointing to a very version more favorable to the United States [1]’.

In light of these divisions, it is hardly convincing that the oil tankers have been hit by Iran, it is not Iran that has raised the tension. On a very well-informed site (analisidifesa) we read ‘it cannot be ruled out that behind the attacks there may be the local allies of the United States, primarily Saudi Arabia and the United Arab Emirates, in order, precisely, to prevent any possible agreement between Tehran and Washington [2]’.

If we wanted to try to summarize what is happening we could say that the Japanese Prime Minister’s attempted mediation was not an autonomous initiative, it had been endorsed and encouraged directly by the White House. The fire of the two oil tankers was a move by the extremists to block the dialogue in the bud. The United States, as Zbigniew Brzezinski wrote in ‘the big chessboard’, cannot tolerate the emergence of a hegemonic power in that area and even less can they tolerate that this power has close ties to China and Russia. This statement is shared by all in Washington, but the options diverge on the tactics to be followed. Bush and Obama, having failed to collect the results expected from the war, were inclined to reach the goal by creating instability, thus preventing anyone from stabilizing and dominating the region. Instead, Trump is convinced of the need to pursue US goals by creating stability, which however must strengthen the US and its allies. How this game will end is difficult to say. At the moment the winds of war have subsided but tensions remain as shown by the latest events between Iran and Great Britain.