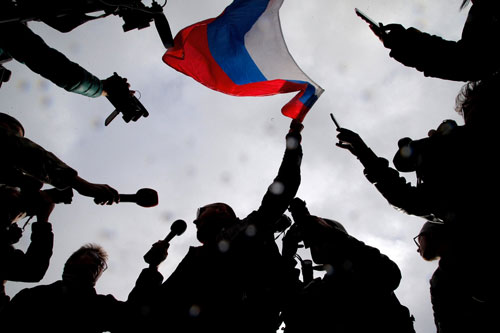 by Mauro Gemma (director of Marx21.it)

The Russian people has spoken, and his voice has resounded powerful.

The Russian people, with their vote, wanted to confirm their confidence in a line of strenuous defence of its homeland, which is currently the target of a massive campaign conducted by Western governments, political forces of different inspiration and mass media which are completely subservient to a war logic of imperialism. This is the true sense of the vote, as Putin himself acknowledged.

Recently, we have seen all kinds of provocation against the Russian Federation: ” Space bubbles” such as the fairy tale according to which the American vote was conditioned by Putin, to whom only a public opinion anesthetized by decades of propaganda in the name of Russophobia can believe (less and less); accusations without evidence, such as those made on the eve of the vote by the British government regarding the affair of nervine gas; the bold support of neo-liberal and pro-intemperialist Russian political forces and figures, completely isolated from their own people, who have openly supported even the criminal Nazi junta in Kiev, against the very interests of their own country.

But above all, it is worth noting the unstoppable progress of the military encirclement of the Russian Federation by the USA/UE/NATO, with the reduction of the Central and Eastern European countries closest to the Eurasian giant to nuclear-armed bases and missile platforms located even only 150 kilometres from St. Petersburg. All this with the participation of the Italian government and the complicity of the forces that support it, starting with the PD, even now that they have been completely delegitimised by our people who voted together for those (and we can think what we want about 5 Stars and League), whose foreign policy programmes include the call for the lifting of sanctions against Russia and the launch of a mutually beneficial policy of friendship and cooperation.

In the framework of the elections of 18 March, which saw a plebiscite consensus towards the Moscow leadership, considered as the guarantor of national defence against external aggression, the voices of those commentators who cannot draw any lessons from the fact that they are increasingly out of touch with reality, are all the more pitchy:

1) The Russian people, with the highest turnout in Russian electoral history (67.5%, over 73 million voters), did not accept the call for a boycott made by the friends of the imperialist West, known for their misappropriations and rightly condemned for economic crimes and surrounded by friendships at least suspicious as those of the discredited heirs and criminals of the “Yeltsin clique”. Yes, Yeltsin himself, the looters of his homeland who had led it to the brink of a chasm, but so dear to the West that he had covered and justified it even when he proceeded, in 1993, to the massacre of 800 defenders of the parliament depleted by his coup d’état (after that of August 1991 which had destroyed the USSR, as a state entity).

2) The Russian people has consolidated their confidence in Putin, who is basically considered the one who has given the country back its proper role in the world, bringing it out of the deadly crisis it was screwing into, after blindly following the recipes of social, economic and foreign policy imposed from outside. The over 56 million votes obtained by the Russian president (76.7%) represent a share of consensus that only a few irresponsible, short-sighted and prejudiced commentators of our country can underestimate, resorting to the abused and stale “arguments” of the dominant propaganda, or even ignore.

3) The Russian people then chose, among the opposition candidates, those who, like the communist Grudinin (who obtained almost 12% of the votes), while making even harsh criticisms of aspects of the economic and social policy of the current Russian leadership, never hesitated when it came to supporting Putin in his action to defend national interests, put at risk by the continuous threats of imperialism. On the contrary, they have always called for more severe behaviour against provocations and a policy of closer cooperation with the People’s Republic of China. At the same time, the electorate has almost ignored the liberal and pro-Western candidates present, which together amount to around 2%.

The Russian people have responded to this as they should, showing that they are the worthy heir of the one that preceded them more than 70 years ago, which, with its strenuous and heroic resistance, which cost 22 million lives, saved the whole of humanity from Nazi-Fascist barbarity.

And you, comrades and friends of the “radical left”, try to get out of the hibernation. Make your irreducible opposition to the preparation of a war against Russia, which is now the order of the day of imperialist chancelleries and which is endangering the very existence of humanity, to be heard by a mobilisation worthy of this name. Because your continuing silence on the most important issue that should alarm all the peoples of our continent today is becoming truly deafening.

1. In Italian the word left (sinistra) and sinister (sinistro) are similar