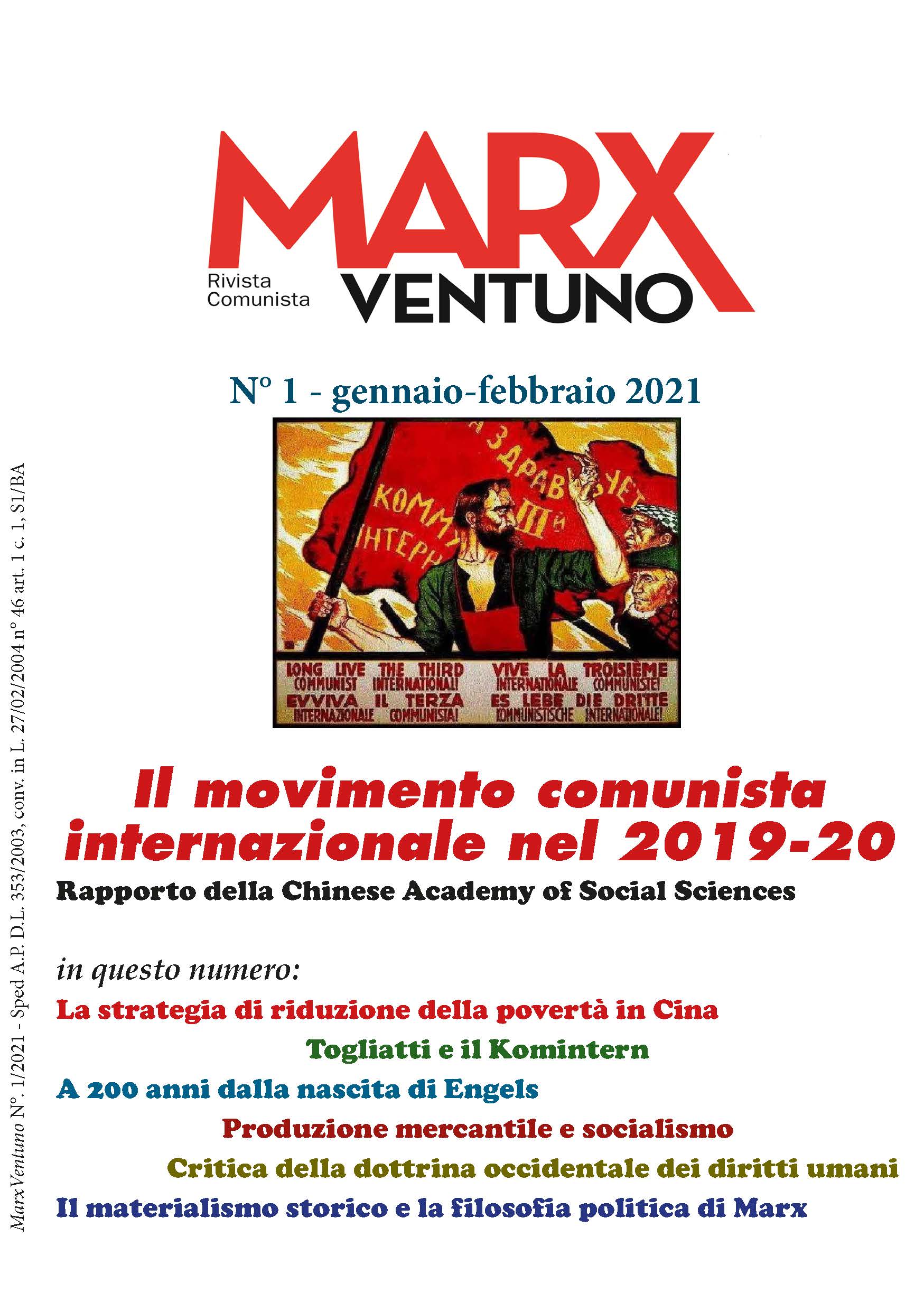 This first 2021 issue of MarxVentuno bears the title – as it has already happened on other occasions, when the issue was not a fully monographic one– of the first essay it contains, the situation of the international communist movement in 2019-20 and elaborated by the research group of the Marxist Academy of CASS. Its choice as the Leitmotif of the entire issue is not accidental: to propose a thought on the state of the art of the communist movement at a world level seems most appropriate in an “epoch of extraordinary transformations” (as the title proposed by the authors of the text says), in which communists – a century after the foundation of the Third International (1919) and of several communist parties founded on the basis of its 21 points (including the Communist Party of Italy – PCd’I on January 21, 1921) – have to face the task of correctly analyzing the main contradictions, the fundamental tendencies of the movement of history, the long-term processes in the path of humanity, and to elaborate the most adequate strategies, the most suitable forms of struggle and organization in order to establish socialism all over the world.

This is a serious, enormous task, but the communist movement, which experienced a rebirth with the October Revolution and the foundation of the Comintern, (on a fully worldwide basis, as foreseen by Marx and Engels’s 1848 Communist Manifesto) thanks to Lenin’s analysis of imperialism and to the consequent political strategy that united the proletarians of capitalist societies and the oppressed peoples of colonies and semi-colonies – cannot engage on a lesser tasks. The communist movement has in its DNA a world vision and a consequent strategic elaboration.

This strategic elaboration, as it be fell the communists in Italy and also in several other countries of what we call, not geographically, but politically and economically, “the West”, has been very foggy, if it has not completely disappeared, for the last decades, especially after the end of the Soviet Union and of the “popular democracies”, decades that we could define – paraphrasing an expression that has become established in historiography to designate the thirty years after World War II (1945-1975) – the “inglorious Thirties” (1991-2021), since they have marked for Italian communists (and those of several other Western countries) a very hard retreat in all fields: politics, trade union, organization, culture, something which had never occurred in any period of the history of the communist movement.

This is a very serious situation, which, due to the current political and social irrelevance, the absence of territorial roots, and the remarkable fragmentation of the meagre and weak forces that today refer to communism, risks leading to the very extinction of communists in Italy. It is a very serious situation, and in order to overcome it and change its course, starting a new ascending phase of Italian communism, it will be necessary to mobilize all available energies, without as high-sounding as vacuous proclamations, without inconsistent voluntarism, but with the strength of the formidable analytical apparatus that the masters of Marxism have given us, to study, study and study, and, with great moral rigor and intellectual and political honesty, to know and recognize the great errors committed in these past thirty years, to analyze and understand their roots, to identify the way to correct them and to start an effectively constructive path, making the spirit of unity prevail on the spirit of division, led in this difficult reconstructive work by the compass of the fundamental distinction established by Mao Zedong between contradictions between the enemy and us and contradictions among the people.

The journal MarxVentuno intends to contribute to this path by promoting moments of encounter and dialogue between Marxist and communist journals, in order to initiate an in-depth reflection on the history of communists in Italy in the post-Soviet thirty years and lay the foundations for that fundamental and necessary strategic elaboration that has been substantially absent in recent decades.

The report on the international communist movement in 2019-2020 was prepared by the research group of the Marxist Academy of the Chinese Academy of Social Sciences (CASS), led by Jiang Hui and Pan Jin’e and others, and coordinated by Li Kaixuan. With the Marxist Academy and the Institute of Marxism, as well as with other important study centres and institutes of CASS, such as the World Socialism Research Center (WSRC), MarxVentuno has maintained fruitful collaborative relations for several years. On the initiative of the Marxist Academy of CASS, chaired at the time by comrade Deng Chundong, some conferences were organised – the “European Forums”, promoted in several Western European countries on the theme of the Chinese way to socialism – which Italian Marxists and Communists hosted for 5 consecutive years, from 2014 to 2018, 4 times in Rome, once in Bologna. MarxVentuno editions also published a volume of the Proceedings (The Chinese Way, 2016).

The World Socialism Research Center, together with the Marxist Academy, organizes annual international conferences (interrupted only last year due to the pandemic) with the participation of Marxist, communist and socialist scholars from several countries of all continents, through which it is possible to develop a fruitful theoretical and political debate. MarxVentuno has taken part in them for many years with its own contributions. The Research Centre on World Socialism has been publishing for some years now World Socialism Studies, a monthly journal – inChinese with abstracts in English, of which we publish the Italian translations on our website. MarxVentuno has established organic collaborative links with this journal.

The report of the research group of the Marxist Academy of CASS, without any pretension of being definitive and drawing conclusions, offers us different points of reflection on the situation of world communism and on the possible strategies that communists and forces of socialist inspiration can elaborate and put into action.

Some of the other essays in this issue are indirectly linked to the CASS report, an important part of which is dedicated to the communist initiatives for the 100th anniversary of the Comintern and those for the bicentenary of Engels’ birth. The article by the communist historian Salvatore Tinè deals with one of the fundamental issues in the life of the Third International: Togliatti’s role in the Seventh Congress (1935) that launched the policy of the popular fronts in the fight against fascism and to oppose the imperialist war.

Vladimir Gryzlov, editor of the magazine of the Communist Party of the Russian Federation Politicheskoe Prosveschenie, with which for some years MarxVentuno has started a fruitful collaboration with the reciprocal translation and publication of articles in the respective magazines dedicates an article to Federico Engels in which he traces the human, political, scientific profile of the great co-founder of Marxism.

And from Engels – in particular from that “unsurpassed example of socialist literature”, as Antonio Labriola called it, which is the Antidühring (1878) – takes its cue Vladimiro Giacché’s essay, already partially published in German in the review of the German Communist Party (DKP) Marxistische Blätter, which, with great capacity for synthesis and critical approach, deals with one of the thorniest and most debated questions among communists and Marxists, particularly after the conquest of political power in Russia and the start of the construction of socialism: the relationship between production of commodities, commodity-money relations (as they were usually defined in Soviet and European popular democracies’ literature) and socialism; This is a very topical and interesting issue, constructively addressed from a theoretical and practical point of view in the experiences of countries such as China and Vietnam, led by communist parties, which, thanks to the dialectical combination of the different forms of socialist property and private property, of plan and market, have achieved an extraordinary development of the productive forces, thus managing, in a very short time from the historical point of view, to eradicate poverty almost completely, at a quantitative and qualitative level unknown to other countries.

The latter theme of the fight against poverty in China, the way the CPC, with its current General Secretary and PRC President Xi Jinping, has tackled the problem, focusing on the new strategy of ‘drip irrigation’ (the metaphor for targeted poverty reduction) instead of the previous ‘flood irrigation’, and the active and conscious mobilization of the grassroots structures of the CPC in the countryside and at the peripheral level, is dedicated the wide-ranging and articulate essay by Lei Ming and Zhou Pei, published in issue 4/2020 of the Chinese Marxist journal Marxism&Reality, with which MarxVentuno starts with this issue a collaboration that we hope will be increasingly fruitful in the future. In order to facilitate the work of our editorial staff, which does not currently have valid translators of political-economic and philosophical texts from Chinese, the magazine’s editorial staff, thanks to Executive Editor-in-chief Xiaowu Huang, has made available to us the English translations of the texts we publish here.

Together with the essay on China’s poverty reduction strategy, two other interesting and important works that have already appeared in Marxism&Reality are published here: Ai Silin’s and Qu Weijie’s, which is a timely and careful critique, developed through the lens of Marxism, of the Western doctrine of the superiority of human rights over national sovereignty, a doctrine which, as the authors write, has been advocated to legitimize the start of a series of regional wars, in particular Western aggression against Serbia and Montenegro with the ‘Kosovo war’ (1999) and against Iraq (2003).

Wu Xiaoming’s philosophical essay on “Historical Materialism as the Foundation of Marx’s Political Philosophy”, reconstructing the philosophical-political path of Marx and Engels, carries out a tightly argued critique of abstract universalism and “ideological mythology”, which takes the ideas or categories of modernity (especially those of “justice”, “equality”, “freedom”) as the basis of the whole theory, and invites us to fully re-appropriate Marx’s historical-materialistic approach.

These texts –as well as those in preparation for the next issue – show us how the development of Marxist studies in China is flourishing. China is now the country with the largest number of study centres, Marxist institutes and schools of Marxism (which Xi Jinping has strongly relaunched in the last decade), with many journals specifically dedicated to the study of Marxism. We need only think of what the bicentenary of Marx’s birth was like in China in 2018 (for Engels’ bicentenary there was the great obstacle of the pandemic) when conferences and symposia were held all over the country, and Peking University organised the 2nd World Conference on Marxism, with the presence of over 330 speakers from all over the world. Unfortunately, we find that there are still very few publications devoted to Chinese Marxism in the West, although this is slowly changing. The Marxists of CASS have started Marxist Studies in China, an English-language publication published almost annually, consisting of a selection of essays published in Chinese in their monthly journal of Marxist Studies. For several years now, CASS has had International Critical Thought as its official journal. Thanks to the publisher Canut we have access to English translations of some works by Chinese Marxists.

But it is still very little. In Italy, then, while there is a discreet publication of an essentially geopolitical character on China, the publication of texts on Chinese Marxism is almost non-existent. The MarxVentuno editions intend to contribute to fill this gap, both by continuing to translate and publish – we hope more widely than we have been able to do so far – articlesand essays, and by starting the establishment of a specific study centre on the development of Marxism in China. We are living in an era of extraordinary transformations: if we look at the path China has taken since the founding of the PRC 72 years ago, we can say that we are facing the greatest transformation – for the shortness of time in which it took place and the mass of population involved – that has ever taken place in history. This extraordinary economic and social transformation is accompanied –like any other great transformation in history– bya great cultural and theoretical development. Chinese Marxist thought accompanies the great transformation in China. Knowing and studying it can givesa significant contribution to the revitalisation of Marxism in the West.