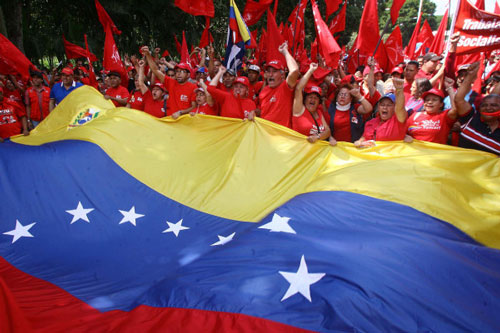 A Golpist opposition that does not want to recognize the will of the Venezuelan people proclaims itself government by inviting the armed forces to sedition.

Immediately President Trump recognizes the legitimacy of the coup, threatens Venezuela with intervention and even armed support for the heirs of Pinochet and Videla and calls on all “Western” countries to follow his example. Like one man, all the worst obscurantist regimes in Latin America respond to the call, not least the parafascist regime in Brazil that also emerged from a coup.

Canada of the “liberal humanist right” Trudeau was also immediately associated with the coup operation. A few hours later, the liberal, anti-souveranist and anti-populist Tusk announced that the European Union would join Trump’s appeal and recognise the self-proclaimed coup government. It is difficult to believe that this statement was not agreed with the EU Commissioner for International Relations, the democrat Mogherini (which suggests that her party has already joined the aggression against Venezuela).

At this dramatic moment, the duty of all the communists, democrats and anti-fascists in our country is to mobilise alongside the Venezuelan people who see the revolutionary achievements of the historical period inaugurated by the presidency of Hugo Chavez undermined.

First of all, we must ensure that our government does not associate itself with the reactionary and pro-Golpist impulses already expressed by Mr Salvini on some occasions with regard to the events in Venezuela. Italy must not participate in this shameful operation! That is why the progressive sectors of the 5 Stars have a duty to make their voices heard and to prevent this infamy! Around the Venezuelan revolutionary cause, all the communist, anti-imperialist and grassroots trade union forces should gather together in a united spirit. Let the great mass organizations such as ANPI (Nation Association of Italian Partisan) and CGIL (Italian General Confederation of Labour) also be mobilized with all their energies.