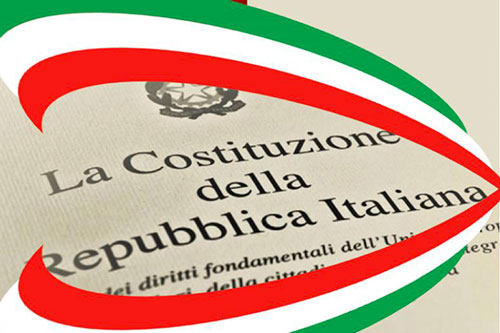 We receive this article from Comrade Francesco Maringiò and we gladly publish it as a useful contribution to the discussion on “Communists and the national question”.

Sergio Fabbrini’s editorial [Italia e Ue, il momento delle scelte strategiche, il Sole24Ore, p.1, 11/03/2018] in the Confindustria (Union of Industrial Owners) newspaper is very interesting. Starting from the analysis of the vote that identifies who won the elections (and for what main reason): “last Sunday, more than half of the Italian electorate, [gave] the vote to two parties (5 Stars Movement and The League) that had a (declaredly) sovereignist program.

These elections, perhaps for the first time, have given us an Italy politically unified around a sovereignist state of mind, represented in the north by the centre-right under leghtist leadership and in the south by the 5 Stars Movement. (…) This is a vote that expresses the request (from different electorates) to regain control over crucial national policies, such as budgetary and migration policies. (…) On 4th March, a widespread economic insecurity (in the voters of the South) and a similarly widespread territorial insecurity (in the voters of the North) were brought to the political surface. The South paid more than other areas for the economic crisis and felt excluded from the subsequent recovery. The north has suffered more than other areas from immigration and has perceived it as an identity threat to its social cohesion.

The fact is that both insecurities were generated by policies (economic and migration) on which Italy has limited competences and resources. These policies are decided in the European system of interdependence (the Eurozone in the first case, the European Union or the EU in the second case) and not in the national system of independence”.

Finally, they stepped up to the plate on the issue which, for the left in this country, is often a taboo: the issue of the defence of national interests. Obviously, this is not a class issue tout court, but it crosses the left-right spectrum: national sovereignty can be defended to strengthen the national bourgeoisie of a country, or to defend its productive forces, whose development is essential for a process of socialist transition.

And the deepening of the crisis has developed in the head of the people (less in that of the leading groups of the political left) the need to safeguard national interests throughout Europe: “the sovereignist forces have won 13% of the voters in Germany (in the last elections of the 24th September) while they have obtained more than 50% in Italy (in the elections of March the 4th)”.

The Sole’s columnist sees a discontinuity between the pro-European orientation and the vote: “according to a recent policy brief by Eupinions, 66% of Italians continue to be in favour of greater economic and political integration. What we need to explain is why 66% was 10 points higher only two years ago”, explained by the intergovernmental system. “The intergovernmental system – the editorial continues – created to manage those policies collectively ended up generating unforeseen effects (…) [and] ended up creating hierarchies of power among national governments or generating decision-making stalemates. Thus, in financial policy, the decisions taken (stability rather than growth) were consistent with the interests of the predominant countries or, in migration policy, the decisions that were not taken (supranational control of borders and flows) favoured the countries least exposed to migration processes. In all European countries there has been a sovereign reaction to the effects of the financial crisis and immigration”. And it adds “European interdependence (in fiscal or migration policies) has not led to a uniform downsizing of national sovereignties. In fact, some member states (such as Germany) have been able to combine support for European sovereignty with the preservation of their national sovereignty, while other member states (such as Italy) have had to give up the second in order to be part of the first“.

What I do not see as being highlighted, in my humble opinion, is that this is not a matter of ” technical “, but of all-round politics: The European Union and the Eurozone mechanism have not lost “the original inspiration”, but represent the implementation of the integration process, based on the imbalance between economic areas and inter-imperialist competition between the Kerneuropa countries (the hard core around the German mark area) and the countries of southern Europe.

What was culpably lacking in this election campaign was a clear position of “left-wing” sovereignism, capable of showing an alternative perspective to the country and responding to the needs of economic insecurity and territorial insecurity.

The avoidance of this point is full of consequences: from the inability to talk to the vast popular sectors that today have supported the M5S and, above all, prevent any sentimental connection with the popular masses that today suffer the crisis.

So, in conclusion, there are two necessities that I see ahead: to build and advance a political line of “left-wing sovereignism” and participate in the referendum for the abrogation of the constitutional amendment that introduced the balanced budget in the constitution: the first brick to be removed to regain sovereignty and national independence.