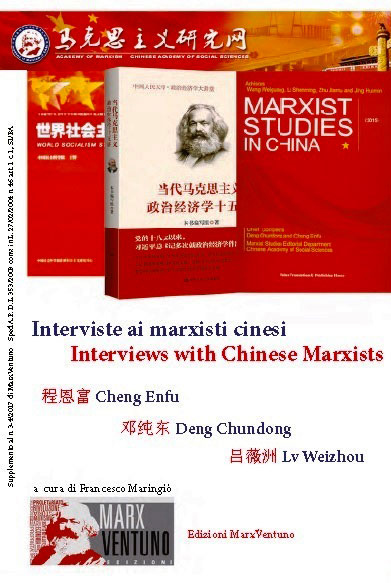 Through three interviews with the Cass leaders and intellectuals vital node points emerges about the discussion on the intellectual and Chinese political dimension. These points not only allow us to better decode that world and to know it deeply, but help us to bring out important questions and essential reflections, even for Western Marxists.

We present three inspiring interviews to many eminent Chinese leaders and intellectuals belonging to the Chinese Academy of Social Sciences (Cass). Two of them were realized during a long period of study in Beijing, while the third is an extract of the most significant passages of a long interview that Professor Deng Chundong released in 2015 and which was published on International Critical Thought, the Cass international magazine, published by Routledge. However, this is an unpublished essay for the Italian readers.

The Chinese Academy of Social Sciences is an important and prestigious institution: in this Beijing academy about 700 students per year obtain a PhD, and some of them will cover key positions in party or in the country’s institutions. But the Cass, which has departments and structures based everywhere in China, it is, above all, a major think tank (Foreign Policy magazine ranks it at the top of all Asia) for the liberal arts and the social sciences disciplines. It is also affiliated to the State Council, the highest administrative PRC authority. This means that departments and Cass academies carry out researches and studies for the government and various ministries.

These three essays are, together, an extraordinary glimpse of the vitality of theoretical and intellectual Chinese debate, and a guide that can help the reader to acquire analytical tools and interpretation keys to make more intelligible the Chinese political debate. For this reason, these papers are really interesting, and we are grateful to the authors, as well as for their willingness, even for the intellectual contribution and interest in a profitable debate with our country Marxists.

Each interview is reproduced in two languages: English (original language) and Italian translation.

We present first an interview to Professor Cheng Enfu, Director of the Division of Academic Marxist Studies of Cass and doctoral school supervisor of the Academy of Marxism of the University of Finance and Economics in Shanghai. It is a very important contribution because it allows us to immediately see the importance, for the Chinese leadership, of the understanding of the long learning process of socialism with its Chinese characteristics: what it has learned, or subsumed or rejected from other experiences of socialist edification, in particular from European ones (Yugoslavia, Hungary, USSR, …). Not only: this contribution is interesting essentially because it is not at all reticent even about the most controversial aspects and difficulties of the Chinese experience. On the contrary, the problems are clearly exposed and analysed, stressing about the risk of an excessive polarization of society and the danger of loss of influence for the CPP, especially if a relentless critique of neoliberalism won’t be pursued. It is precisely the progress and development of the country implemented by the Party that could create the conditions for the birth and the development of political power groups that oppose themselves to the hegemony of the CPC. Professor Cheng, in order to prevent in China what has already tragically happened in Soviet Union, aims to learn from history and to implement choices that could prevent this tragic outcome.

It is also interesting how Professor Cheng expresses, clearly and rigorously, his point of view about the crucial issue of the market and the State role in the allocation of resources, a topic that has been the focus of the discussion of the third plenary session of the 18th Central Committee of CPC. Last, but no less important, there is an interpretation given to the project of the New Silk Road, which is not only an infrastructure plan and an exit strategy from the crisis – as we can clearly see in the West – but it is a way of “global socialism building with Chinese characteristics”, a great soft power’s task through which the Chinese communists help the strengthening and development of the international communist movement.

The second interview, instead, is a contribute of Professor Deng Chundong, researcher and dean of the Academy of Marxism, of the Chinese Academy of Social Sciences, whose research interests mainly focuses on the theory of socialism with Chinese characteristics. The Italian public know him already, because Professor Deng was the main architect of the editions of the International Forums on Chinese Road held in Rome (as well as in Germany, France and Spain) from 2014 to 2016, co-organized by Cass, by the Marx XXI Association and MarxVentuno publisher.

The core of the interview is about “Chinese Dream”, an expression used for the first time by President Xi Jinping, during a 2012 speech at the Chinese National Museum, just after his election to General Secretary of the Party. However, this concept has deep roots: Xi, in fact, introduces the current “Chinese dream” in the long (and troubled) history of China, aware that after 1949 it assumes a particular meaning. Because if «the Mao Zedong’s thought has showed the way of China’s national independence and has laid the foundations for the building of the socialist system, socialism with Chinese characteristics has shown the direction of the nation’s prosperity» and then, as Professor Deng underlines, «we must continue to trust in our theories, in our path and in our institutions».

But the “Chinese dream” is also the imaginary horizon towards which modern China moves on. The reforms undertaken after the 18th Congress mark the stages of this process and enrich themselves through the innovations of the “two centenary goals”, “four comprehensive”, etc. The reading of this interview is useful because it takes us by the hand along the new Chinese policies, helping also the less experienced reader to put, in a broader perspective, themes like the “general building of a moderately prosperous society”, “comprehensive deepening of reform”, “full implementation of the rule of law” and “comprehensive strengthening of party discipline”.

Since Obama too has referred in his speeches to the “American Dream,” we rightly asked to Professor Deng about the similitudes between American and “Chinese dream”. He points out that, as they are two great countries, the two “dreams” have undoubtedly some points in common, but at the same time he stresses that it is necessary to point out the differences, because «unlike the American Dream, which highlights the struggles and successes of the individual», the “Chinese dream” declaims «the collectivism and the core of socialist values», and highlights «the link between individual destiny and national destiny», without forgetting that the “American dream” defies the world peace.

Finally, in the realization of the “Chinese dream”, great attention is paid to how the international relations should be based, because certainly they cannot adhere to a single universal model. On the contrary: the Marxist Chinese intellectual, point out that it is a priority task to «uphold the principle that all countries, big or small, strong or weak, rich or poor, have equal rights [and] that fairness and Justice must be supported and that arrogance of the stronger over the weaker and the oppression of the poor by the rich must be stopped» because «the world peace, the national development, the social progress, the economic prosperity and a better life, are the prerogatives shared by people all over the world».

The last interview, in the end, is the one released by the Professor Lv Weizhou, Director of the International Communist Movement Department, Academy of Marxism (CASS).

This ideas exchange is extremely interesting, because it leads us to improve our knowledge on the Academy of Marxism, its structure and its changes during the years. They have redrawn the appearance of the Department, since they have encouraged an interconnected disciplines approach and comparative studies between socialism with Chinese characteristics and other international socialist experiences, as well as between socialism and capitalism. Based on the dialectical elaboration of Marx and Engels and Lenin’s reflections and practice after the victorious October Revolution – in particular the NEP [1] – during time we have learned how important is, in the transition to socialism, gain from experiences, from acquisitions and from universal achievements of capitalism and to integrate them into an own system. Therefore, in addition to investigating the current Communist movement, the Chinese researchers turn their attention to the study of contemporary capitalism.

The conversation with this eminent Cass leader is useful also to understand the interpretation given by Chinese intellectuals and leaders to the collapse of the Soviet Union (that is always called “the drastic changes in the USSR”). In fact, while in the West we axiomatically say that the defeat of the USSR involves the absolute impossibility to practice alternative ways to capitalism, in China this thesis is not accepted. Although socialism is experiencing a period full of great difficulty, it is the future, as this Chinese intellectual says. She then explores the relationship between the experiences of the Communists in power with the communist movements at the opposition in their respective countries, revealing a dialectic relationship: the strengthening of the socialist countries experiences can contribute to the development of the communist forces that have not yet a consistent force but, at the same time, the divisions and internal conflicts within these organizations have a negative consequence on the whole international communist movement.

Finally, focusing on the difficulties experienced by communist parties in this historical period and on the difficulties in building unitary experiences and occasions of permanent confrontation, the Director Lv invites to conjugate (just as in China’s experience) ideological firmness with tactical flexibility, also because «alliance is not synonymous of “unanimity”». She thus exhort to work putting on the table the uniting aspects, rather than exacerbate the division points.

Many times we said (see MarxVentuno review and the site marx21.it) that the comparison and better understanding of the Chinese Marxism and of the historical experience of socialism with Chinese characteristics is essential. Exactly in these times, in which the Italian newspapers continually report news coming from China or regarding its leading role (primarily from economic point of view, but also from cultural and diplomatic) in Italy and in Europe, it is essential to resort to cultural and ideological sources that underline the policies of this great country.

The three interviews that follows help to achieve some key interpretations in this learning path. And it is through the appropriation of a critical and more faithful reading of the ongoing processes that we can place the Chinese trend in the wider history of the communist movement and of the edification attempt of a socialist state, while we celebrate this year the centenary of a first historical attempt, started with the October Revolution.

[1] See in this regard the most recent and very useful anthology of Lenin’s writings after the October Revolution, Economia della rivoluzione [The Economics of Revolution], with extensive introduction and notes by Vladimiro Giacché; publisher “il Saggiatore”, Milano, 2017.