by Francesco Galofaro, University of Turin

There is little to be done: the more the mass media try to portray a European Union that is useful and citizen-friendly, the more they are drowning in the objective contradictions of the Community institutions. A good example of this is the approval, on 26 March, of the European directive on copyright by the European Parliament.

As early as last year the danger of the “market gag” to freedom of expression had been postponed because of the obvious, disturbing doubts it raised (see here [1]). Today, the new directive is presented as follows: the EU institutions intervene in defense of small authors against the giants of the web: Google, Facebook, Twitter and so on. In fact, the law concerns publishers, to whom the directive provides tools to negotiate the payment of copyright.

The regulations put a stop to the free circulation of texts, videos, articles. In fact, site administrators will be responsible for violations committed by users: so, if I try to publish a piece of Repubblica in the context of an article on my blog – perhaps to distance myself from its content – my writing will be automatically analyzed by an algorithm able to make ethical decisions and censor me. It’s obviously about restricting the circulation of information. And since it is something that dangerously resembles absolute monarchies and totalitarian regimes, it justifies intervention through market ideology and the protection of private property.

To fight the directive we find not only the multinationals of Silicon Valley, as it goes without saying; even Wikipedia has overshadowed its pages to protest against the European Union’s attempt to strike at creativity and freedom of expression online. Wikipedia has decided to fight despite the fact that, in theory, the measures provided by the directive do not directly affect it, since, again in theory, they exclude from the special supervised activities training and education research: “Although Wikipedia may not be directly affected by these rules, our project is part of the ecosystem of the Internet. Articles 11 and 13 would weaken the web, and would weaken Wikipedia.”

How can the directive undermine the production of content by users? Let me give you an example that goes back a long way before the directive came into force. In fact, Google Books users have already had a taste of what might happen. Increasingly, searches return the message: “Some results may have been removed under European data protection law” – see Fig. 1. 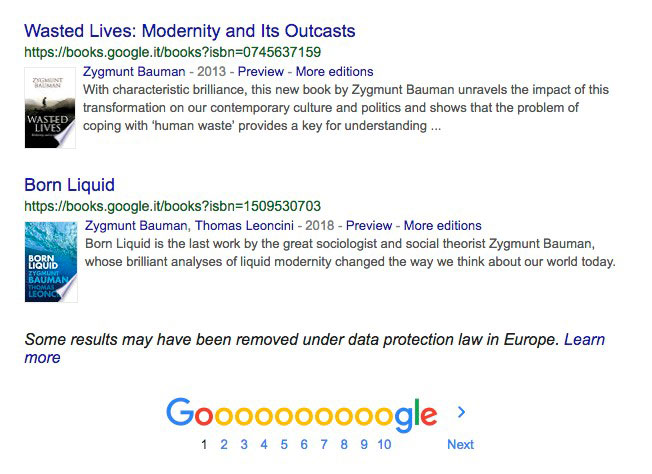 It is difficult to understand how data protection concerns the consultation of an essay by Bauman, but this is the result of yet another European regulatory mess, motivated by the intention to protect the right to be forgotten [3]. Therefore, for some time now, readers who connect to the Internet from the EU have no longer been able to take full advantage of Google’s babelic library and the possibility of searching for a name, a subject, a topic, within the contents of millions of books in a matter of seconds.

The problem, of course, is not just for researchers: any user will find a filter to their results, since, from now on, search engines will also have to pay for snippets, previews that they display in response to queries from users. In the future, we must all turn into professional hackers, disguising ourselves as users of Costa Rica, using anonymous browsers like Tor, in order to escape the European attempt to stifle freedom of information.

A sad spectacle was also given by the hunt for the deputy carried out by the lobbies of publishers, film and music companies, journalists, artists, actors, scriptwriters, multinational algorithm companies, behind the session. This partly explains the transversal split between the European political groups at the time of the vote. This is proof that the EU is a lobby-based democracy with no transparency. Although there is a European register of lobbyists, it presents serious problems in terms of voluntary registration, omissions, missing financial data, lack of periodic checks [4].

Future scenarios are disturbing. It’s clear that the big search engines will not be at all worried about the link tax, because they have the economic means to cope with it. The world market is divided between five search engines: Google (74%), Baidu (12%), Bing (8%), Yahoo! (3%), Yandex (1%). All the others share the remaining 2% [5]. Let’s consider that Baidu addresses those who speak Chinese and Yandex those who know Cyrillic: nothing will prevent the other three, having to pay for every link they have, to present them to us in the order they prefer, optimizing the cost/revenue ratio, a thing that, moreover, already happens. What will not happen, however, is that small managers, startups, groups of open source programmers, theoretically excluded from the loop of European legislation, can never really dream of setting up an alternative search engine. Here the reader will excuse me for a personal example. With some colleagues I developed a semantic algorithm to allow the user to search for the word A in the B sense, for example “Marx” in the sense of “economist”, increasing the user options [6]. For search purposes I would like to create a search aggregator that draws from the main current engines, to return the results in an order that takes into account the sense of the searched word. However, at the end of the development phase, I would in fact be obliged to sell my algorithm to one of the world’s existing oligopolists. Who would be able to take the risk of facing the current competition, perhaps building a free, self-managed and open source engine, with the prospect of having to pay for every result shown? I have given my experience only as an example of how the support of the directive for the “small” against the “big” is completely ideological: in reality, all that is done is to consolidate the current oligopoly, to the detriment of any alternative, market and non-market; to the detriment of the citizens of the EU and the free movement of information. I repeat what I have already written: the so-called liberals in power in the EU are threatened by the increasingly marginal weight of ‘official’ information in the manipulation of public opinion and the creation of consensus. For this reason, those same liberals who cry out for scandal every time Russia and China try to regulate their networks politically, in the name of the market, are willing to do much worse, sacrificing freedom of expression.