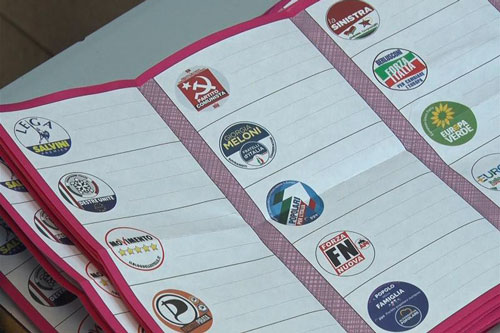 Approximately one week after the vote, we can try to venture the first considerations. A premise is needed: the European elections differ from the Politics elections, the turnout this year stops at 56% against 58.8% five years ago, numbers much lower than the Italian elections. This low turnout is one of the elements that in the past has produced surprising results that have not always been maintained over time (just think of the 40% reached by the PD five years ago).

I therefore start from the assumption that the results must be carefully considered, but despite this some considerations can be made.

The most surprising figure is the two governing parties, whose percentages have been reversed. Lega goes from 17% to 34%, the M5S from 32% to 17%. The difficulties of the 5 stars are obvious, not only were they mediatically erased by Salvini’s communication skills but they found themselves in the government loaded with great expectations and they failed to match.

A movement that remains of opinion without a real rooting in the territory is punished by the incapacity shown, until now, to make incisive choices by the government. The 5 star vote is partly won by the League and partly falls victim to abstention.

If, as is not to be excluded, the government experience will continue for the M5S, it will be very difficult, though not impossible, to adjust the course. The movement has already shown that it is capable of straightening out difficult situations (as in 2014), but the social problem to be solved remains, against which even the Renzi government has crashed. If the problems that afflict Italy (starting with growing poverty) are not resolved, it will be difficult to be rewarded by the vote.

If it is clear who is defeated by the election is equally clear the winner. Lega doubles its percentage and stands as the dominant force of a center-right which, even with this electoral law, can point to the government.

What’s behind this clear victory? Salvini’s national popular message was successful, pouring votes from the 5 stars (as mentioned) and also from Forza Italia. The impression is that Lega is experiencing a transformation (yet another) to become the reference point for the great international financial capital. An alliance between the big capital and the impoverished middle class would be very dangerous, but is it possible? In the past Berlusconi has partially managed to hold this social block together but in a totally different socio-economic situation; the economic crisis and European constraints risk making this alliance very unstable.

Either the European constraints are respected or the middle class is helped; tertium non datur.

In any case, rather than shouting to the fascist danger for tiny parties that collect nothing but crumbs, we must focus on this risk.

The left: true or presumed

If for the two government parties the picture is clear (one wins, one loses) for the PD we can talk about tightness, the data of the Cattaneo Institute (even if referring to only 5 big cities) show a Party that takes a little bit of votes from Leu but does not tear from the 5 stars. On this point it is necessary to reflect: voters that we can define as left-wing (for the ideas they have about work, democracy, international politics) or continue to vote 5 stars or stay at home missing a true leftist proposal that can say clear things about leaving the EU, the euro, NATO and much more.

In fact, on the left the picture is depressing. ‘La sinistra’ achieves a very thin result, less than 2%: it is the culmination of a political path that has brought this piece of the political world ever further away from real problems, replacing the social question with a perspective based primarily on civil rights. A political proposal that catch in medium-high incomes but does not speak to precarious young people, to workers and in general to widespread malaise. A left that presents itself as a europeanist, obviously for a Europe of peoples and not of capitals, thinking it can reform Europe, does not realize that it presents a proposal that is difficult to distinguish from that of the PD or other parties such as + Europa. Civil rights and a more social Europe, beautiful but empty sentences … and voters are not stupid!

One last reference to the PC that even if it stops below 1% almost doubles its votes in absolute terms. Rizzo’s political project is not tied to the election result; this is his strength, while in the past among the communists in words he pretended disinterest in the elections but in fact his own action was oriented towards that, the Communist Party ‘uses’ the elections to root its own organization, to let growth of cadres and to give visibility to their ideas. The criticism of the international positions of this Party remains firm, in particular on the role of China and the global confrontation we are experiencing. However, these divisions must not make the confrontation and dialogue fail.

In the past in Italy and in the world the Communists lived difficult moments, even more than those we live, Mao said that a great march begins with a small step. It’s time to take this step in the right direction. From 2008 to date, there have been countless coupled and confused attempts, electoral cartels destined to dissolve the day after the vote, which are regularly punished in the polls. We put the fight against the EU and the euro at the center of our action, the no to NATO, we explain that poverty, unemployment and precariousness cannot be fought within Europe, we unmask the so-called ‘populists’ who are nothing else that the other side of the medal of liberalism. Let’s get back into the game without fear of burning bridges behind us. Only in this way could we recover and give political backing to that world of the left that has taken refuge in the 5 star vote and that today risks falling into disillusion and not voting. Like the portuguese communists, we are the cornerstones of an innovative political project of patriotism and internationalism.

Marx would tell us that we have only to lose the chains, surely we will not lose our credibility, which is all to be rebuilt.