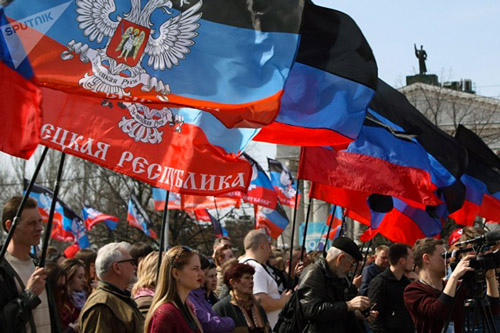 The attack on Zacharchenko on Friday afternoon at the Separ coffee shop in the heart of Donetsk caused another five deaths and 11 injuries. A child would also be among the victims. The site of the explosion is located a few hundred meters from the headquarters of an OECD, increasingly reduced to a silent and opaque puppet. The attack was followed by an intensification of coverfire on the front line, but the People’s Army managed to stop any Ukrainian desire for advance. Eduard Basurin, commander of operational command, told television channel Russia 24, to have recorded movements of Ukrainian troops along the line of contact, maximum alert level.

Meanwhile the new President of the People’s Republic, Dmitry Trapeznikov, has restored the curfew and declared three days of mourning. The funerals will be held on September 3. Due to the mourning, the opening of the school year will be postponed from 1 to 4 September.

The Donbass Operational Command has little doubt that the Ukrainian services, under the command of the US forces, are behind the attack:

“The enemy does not have the opportunity to take advantage of the created situation and violate our borders”, he says with a message “The Ukrainian regime will bitterly pay the sordid blow inflicted on us”.

If you confirm these dynamics, the assassination of Zakhaechenko would seem more like a violent and criminal coup attempt, something more than a destabilization: an attempted coup d’état. The authorities are pointing the finger at the Ukrainian Government.

Trapeznikov, in fact, announces that the suspected bombers detained yesterday, have confirmed the involvement of Kiev in the massacre of the coffee Separ. There is no doubt in the minds of Moscow’s foreign spokesperson, Maria Zacharova, who yesterday, without delay, blamed Ukraine for the crime and called for a super partes commission of inquiry from the international community, given the inability of the Kiev Government to conduct its investigations impartially. It is an attack that shows Ukraine’s will not to talk, not to agree and not to stop at anything. “It would be no coincidence that the attack took place a day before the school was opened, when the children returned to the city from their holidays,” the Russian spokesperson continues.

It was not long before Putin’s comment, who intervened personally, with an official statement a few hours after the incident, to offer his “deep condolences for the tragic death of the head of the People’s Republic. He defined the massacre as a “despicable crime”, committed by those who want to drive away peace, by those who have chosen the path of destabilization and terror. Putin entrusts a telegram to the Donetsk Republic with these harsh words condemning the attack:

“The cowardly murder of Alessandro Zakharchenko is further proof that those who have chosen the path of terror, violence, intimidation, do not want to seek a peaceful political solution to the conflict and that they do not want to conduct a real dialogue with the peoples of the Southeast.”

The president of the State Duma, Vyaceslav Volodin, is of the same opinion:

“The assassination of the head of the DNR is chaos, which removes the significance of the Minsk agreements and all the steps taken over many years by Russia and the international community to stop the war in south-eastern Ukraine.”

Putin hopes that the attackers will receive a well-deserved punishment for their crime and promises that they will not succeed in bringing the Donbass people to their knees.

Ukraine rejects the accusations from the sender and talks about conspiracies and self-inattentions, about internal power conflicts. The Ukrainian military command denies having tried to break through the positions of the People’s Army.

Whether the murder of Zacharchenko is an attempt at a coup d’état led by Kiev or not, one thing is certain: the elimination of one of the signatories of the Minsk package of measures risks to blow up the peace table. Eventual events that Moscow fears and Kiev hopes for. The Poroshenko regime has in fact made considerable efforts to disregard the Minsk agenda on time.

Also remarkable is the prophetic capacity of a Ukrainian blog, unian.info, which on 28 August foresaw the imminent liquidation of the President of the DNR. It is reported that according to Yuri Karin, a military journalist, Zacharchenko has been replaced with a personality more appropriate to the dialogue with Kiev. “It will also be replaced dramatically. According to the Ukrainian source, the replacement would have been through the courts, with a commission that would have to investigate for abuse of office and corruption, not with a bloody massacre. One wonders whether the publication of this disturbing article is a coincidence or an attempt to muddy the waters even more, get your hands on it and create the framework to be able to bounce the accusations of this horrendous crime on Russia.

It is certainly known that the blow is hard, but the war is not lost. A people who are accustomed to death, who forge steel, dig tunnels into the earth and have resisted for four years a fratricidal war wanted by the Western oligarchies and NATO, will not allow themselves to be intimidated in this way. The Donbass that resists with its head held high does not bend.

“We will not take a step back from the chosen course,” says new President Dmitry Trapeznikov, “no matter how intimidating the enemy wants to take us off the road. There will be no failures, no interruptions. Steelworks will continue to produce, public services will continue to function, pensions and social benefits will continue to be paid. Life will continue in the name of Zacharchenko. They kill a man, a Hero is born. A symbol of the homeland and liberation of US/EU fascism.”