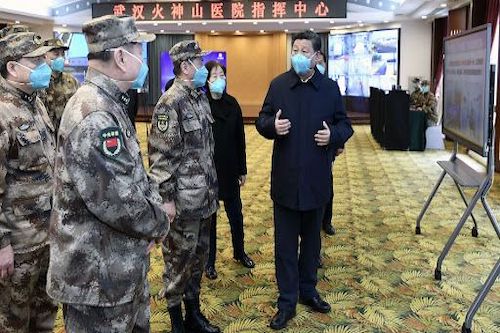 Since this epidemic began, the number of unfounded accusations and insinuations against China has multiplied each day. For example, on March 30th Pierre Haski wrote an article for France Inter, accusing China to hide the real number of the Coronavirus victims. Haski refers to the number of funeral urns sold in Wuhan, which would be almost double the declared dead. He also mentions a brave doctor who mysteriously disappeared after reporting the matter. Haski is not an epidemiologist, but he accuses the World Health Organization of poor supervision. The motivation provided by the author is clearly ideological: “In a context like the present one, in which Beijing builds on its successes to boast the merits of its political system, greater transparency would be indispensable[1]“. In short: we are in the middle of the cold war.

One day before Haski, on March 29th, the Italian economic newspaper Il Sole 24 Ore had already published an article on the same subject, writing that the urns-based argument assumes that Qingming, the day of the dead, is celebrated in China on April 4. “And that for that date the Wuhan funeral homes would like to deliver all the urns to their relatives, at a rate of 3500 urns per day from 23 March. The calculations are correct, but the basic thesis is false. Because in Wuhan, this year, the Qingming celebrations are prohibited by a provision signed by the local government on March 26th. Any tomb sweeping day is suspended until April 30th. […] In short, the link between daily ballot boxes and the deadline for Qingming does not exist[2]”.

As Il sole 24 ore points out, the thesis of the ballot box was propelled by Radio Free Asia, a Washington-based broadcaster, and is false. In short: Haski’s article presents a false argument; this argument has beenalready contradicted; this argument is not based on epidemiology; Haski does not quote his source; Haski does not know whether the “brave doctor” who accused Chinese government disappeared or not, he simply trusts Radio Free Asia; he charges China of conspiracy. All these features allow us to categorize the article as a classic fake news.

How to recognize fake news

I apologize for using the term fake news. “Fake”is just the label that some propaganda attaches to the news of the opposing propaganda. It is a showdown whose stakes is the power to decide what’s true. Official media often accuse social networks to spread fake news, while claiming the monopoly of correct and verified information. This is obviously not the case, since the article published by France Inter has all the characteristics of a fake:

1. the author is not a scientist;

3. he does not acknowledge sources;

4. he does not propose scientific arguments or data;

These arguments spread rapidly, since they instil fear and rage, thus bypassing critical sense; on the contrary, medical research is technical, difficult to understand, has to be controlled through a very long process of peer-review, and to be “translated” into common language by science communicators.

Why would western countries accuse China?

The problem that this kind of articles faces is the following: why is the spread of the virus higher in some western countries than it is in China? In the US the active cases are 493650 while the deaths are 22109; in Hubei, China, the active cases are 83135, the deaths are 3219 (I am writing on April 13th). Do the numbers prove the superiority of the communist system on western one? This doubt is inadmissible: China must have rigged the data.

According to a scientific interpretation of the data proposed by Italian researchers and scientist of the University La Sapienza,the difference between China and western countries is the speed of the countermeasures: “The beginning of the epidemic had the exact same number of infections in China, Italy and other countries. The difference is that China blocked Wuhan and the whole Hubei region 8 days before Italy, quickly and severely”. This happens because the contagion curve is exponential. For example, let us say that China started fighting the epidemic on day one, when 4000 people were infected. This means that Italy started on day 8, when the epidemy had reached 512000 people (4 – 8 – 16 – 32 – 64 – 128 – 256 – 512 …). In short: the Chinese moved faster and better. This is why Italian researchers promoted an open letter to the governments warning them to be timely in adopting the necessary isolation measures[3].

What if anti-Chinese bias had affected western readiness to fight the virus? For example, on January 24th James Hamblin published an article on the Atlantic[4], titled “A Historic Quarantine: China’s attempt to curb a viral outbreak is a radical experiment in authoritarian medicine”. Ironically, the editor added a note before the text: “Information about the novel coronavirus is rapidly changing. As a result, some of the information or advice in this article may be out-of-date”. Hamblin wrote:

a. The moderately virulent nature of the pathogen seems at odds with the fact that the largest quarantine in human history is now taking place in an authoritarian state;

b. International agreements were put in place to limit the practice as a matter of justice, because of the burden it placed on people and economies, in addition to basic questions of effectiveness;

c. China, given the advanced spread of the outbreak (…) some experts believe any window for effective containment has passed;

d. China has a political stake in the appearance of an authoritative response;

e. In the U.S., the constitutional basis for quarantining is somewhere between tenuous and non-existent (…). A massive imposition like China’s would be unconstitutional, according to James Hodge, a health-law professor at Arizona State, who noted the likelihood of human-rights violation in such a scenario;

It is possible that an ideological bias let western countries and governments underestimate the real danger, interpreting China’s behaviour as an effect of his form of government and as a form of propaganda.

Medical science in the crosshairs

All Hamblin’s insinuations have proven to be unfounded: China’s answer to the virus was adequate and justified, quarantine just works, burdens on people and economy sometimes are necessary and cannot be considered a human-rights violation. Above all, the virulent nature of the pathogen was not “moderate” at all. In the present case, rational expectations toward governments imply to cooperate, and to share medical research. Western and Eastern scientists and researchers are working together: a glance at Google Scholar reveals how Chinese studies are published in such prestigious scientific journals as The Lancet, the New England Journal of Medicine, and Nature, matching their quality criteria.

Unfortunately, American government decided otherwise, blaming WHO organization and menacing to cut off funds in the midst of a pandemic[5]. Having lost the propaganda match, the US decided to shoot on the referee, putting in danger humankind. Furthermore, CNN insinuated that Chinese medical research is not free, basing on central government directive and online notices, that have since been removed from the web. CNN interviews an anonymous researcher who concludes: “I think the importance is that the international scientific community must realize that any journal or manuscripts from a Chinese research institution has kind of been double-checked by the government. It is important for them to know there are extra steps between independent scientific research and final publication”. Once again:

1. None of the authors is a scientist;

3. The article does not acknowledge sources – they disappeared; the interviewed researcher requested anonymity;

4. The article does not propose scientific arguments or data;

As we saw, an anti-Chinese bias let early articles on Coronavirus represent lockdown as a political, scientifically unjustified choice, mainly because the virus was considered harmless. Science and data proved China to be right; thus, new articles try to delegitimate scientific authorities and research. According to Umberto Eco[6], the semantic space (the space of the meaning) of every debate is contradictory: A distinctive feature of ideological asserts is to hide these contradictions, opposing simplistic and one-sided interpretations to difficult political choices, denying the very possibility of different interpretations. This seems a good criterion for identifying ideological fake news. Scientists, intellectuals, and journalists should make every effort to foster mutual understanding, and to open a new era of cooperation with China. In the situation of extreme difficulty of the world, we can only hope that this propaganda will not cost too much in terms of delay in responding to the epidemic, adverse economic consequences, and victims.

2. https://www.ilsole24ore.com/art/coronavirus-cina-ha-mentito-numeri-ma-wuhan-non-sono-morte-42mila-persone-ADPepmG?refresh_ce=1retrieved on April 13th (our translation).