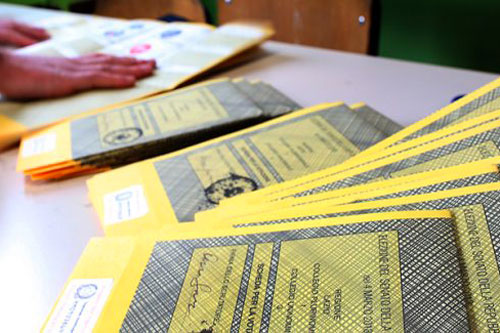 This article by Comrade Marco Pondrelli is the first of a series of contributions that Marx21.it will dedicate to elections and other central themes of the political debate, with the aim of providing a key reading and a non-conjunctural contribution to the debate on the left.

What were the camps on the ground in these elections? Confindustria’s [1] newspaper gave the answer: Sergio Fabbrini in two editors (14th and 21st January) appeared on’ il Sole 24 Ore’ explained that in Italy Europeists and Souverainists were confronted. Two sides transversal to the different sides and individual parties, but with clearly defined characteristics. On the one hand, there was European integration and, as Panebianco (Universitary Professor and editorialist of Corriere della Sera) often reminds us from the columns of the’ Corriere della Sera’ (Conservative newspaper), NATO, on the other hand, national sovereignty.

The Sun 24 hours has no doubt where to stand, arriving at the edge of subversion when it says that “if the political and electoral institutions are not able to guarantee the preservation of that relationship[with Europe][…] then it is necessary that this relationship to be protected by our ruling classes”, everything can be discussed except our membership of the EU (and the euro) and NATO. The large media in the country throughout the electoral campaign have built an orientation that considered a sovereign decision of the Italian people to be inadmissible if it had called these memberships into question. The underlying reasoning has always been that the reappropriation of national sovereignty is inadmissible and that membership of the EU and NATO is not in the electorate’s hands. Our relations with Russia must follow Washington’s wishes even when they affect the vital interests of Italy. We have read fake articles in the newspapers in which Putin was accused of interfering with the Italian elections, true fake news aimed at attacking a defense stance of popular sovereignty for being an instrument in the hands of a hostile power.

Despite all this, the 4 March elections gave a very different response from the one hoped for by the Italian establishment (and not only).

There are undoubtedly two winners: 5 Star Movement (M5S) and League (who changed his name to gain votes in the whole country). Both political formations have won because they are able to respond to two essential factors: first of all they were able to grasp the new international phase, starting with the election of Trump which has changed, and will continue to change, the world balances. It is no coincidence that Bannon (former strategist of the American President) gave an interview a few days ago at the Corriere della sera in which he emphasized the strength of the Italian “populists”.

Secondly, both lists were able to represent a widespread malaise in Italian society. The League that was born giving voice to the little bosses of the north understood that the crisis has thrown this sector of society into poverty. There has been a proletarization of the middle class. The M5S has managed to do the same operation by representing the many young people who live in a precarious situation, thus linking the generational question to the class exploitation. This suffering has been transformed not only into a fierce attack on migrants and the caste, but also into a “Souverainist” proposal.

It is painful to note that political groups, which on many issues are light years away from the Left and the Communists, take on board the proposals that these parties should support and manage to candidate representatives of social struggles or intellectuals belonging to the Left. There are many people elected in the ranks of the M5S who have an openly left-wing political profile and the League itself has had the foresight to nominate those who are attentive to social issues.

It is wrong to overturn this result as the victory of qualunquismo or fascism. If the greatest theoretical elaboration of the left concerns the use of subjunctive by Di Maio [2] (the President of 5 Stars Movement), it is not surprising that it is now relegated to the margins of Italian politics. The signals coming from the voters must be caught, and we must learn from defeats. In the popular vote there is more wisdom than one might think, but for the leaders of the left, Bertolt Brecht’s warning seems to be still valid:”the central committee has decided: because the people do not agree, a new people must be appointed”.

Together with Berlusconi, unable to grasp these novelties, the first loser is the Democratic Party. The PD undoubtedly suffers from the malaise that European social democracy is experiencing (Germany, France, Spain, Holland, Greece, etc.). In addition, there is an Italian specificity, the renzian attempt to fish in Berlusconi’s electoral basin not only did not lead to new votes at the Pd, but helped to make many of those of the traditional left-wing electorate (starting with the school community) lose out. The PD that has governed directly or indirectly since 2011, seven years of government attentive to compatibility, insensitive to the cry of pain that emerged from the social corps bent by the economic crisis, impervious to any attempt to safeguard the country’s productive capacity, but attentive to the demands of the Troika, could not but lead to this result.

The European Left is responding to the widespread crisis in two ways. There is the Macron-Blair model which consists in abandoning the social anchorages of the left and there is the opposite model, that is an attempt to rediscover the roots of a reformist left (but compatibilist) and attentive to social reasons. The Italian PD remained in the middle, closer to the Macron model but unable to make a clear choice.

The second model is the one that inspired the Pd’s escapees. Liberi ed Uguali (Free and Equals, Leu) however comes out defeated in these elections. The strategic plan of D’Alema and Bersani (main political figures and founders of Democratic Party) was to radicalize their own positions and capitalize on the collapse of the renzian Pd and then reopen a political relationship with a “different” party. A failure, that of Leu, which is the result of the lack of credibility of the political class that animated him, but which is also due to a political project that, where it has been applied, (look at Syriza in Greece) has given very bad results. Proposing redistributive policies within a Europe that has made wage competition its material constitution is not a credible prospect. There are few voices (such as Fassina) that have had the courage to question the European foundations (starting with the euro), and in general Leu has maintained his pro-European vocation, which is difficult to reconcile with progressive policies. A contradiction that concerns anyone who proposes social and redistributive policies: without calling the given framework into question at its root, there is no political room. The first statements of dialogue with the M5S for the formation of the government (even though controversial within Leu), however, represent a noteworthy step.

The disaster also affects the so-called radical left. Despite the disappointing result (1.1%), the interpretation of some of the list’s leading figures was positive, arguing that it was a young formation, born just three months ago. However, it must be remembered that inside Pap there were historical organized parties such as Rifondazione Comunista and the new Italian Communist Party, in addition to the Communist Network (and also the Trotskyist “Anti-capitalist Left”). But, as has always been the case over the last 10 years, these formations joined together a few weeks before the vote without a real project, giving the idea of an electoral cartel with a single objective: to return to Parliament. The voters did not perceive the long term project of this list and the alternativeness of its programmes (also because on some central issues such as the euro and the defence of national interests, the ambiguity was preferred to the clarity of the contents) and they lived this experience as yet another “stunt” in the run-up to the elections. Although there was a convergence between three communist organizations (together with other entities) the message that has passed is that of a minorist movement list, more attentive to the historical themes of Autonomia Operaia (close to the views of Toni Negri), than to those closer to the struggles of the workers’ and communist movement of this country. There were also limits on foreign policy, too, and an ambiguous position was preferred on issues such as the war in Syria, the Kurdish question, the neo-Nazi coup in Ukraine, the centrality of the fight against NATO and military servitude, and a position on what is happening in the world, and the interpretation of the fundamental dynamics in progress.

The election campaign conducted by the Communist Party of Rizzo, which in its statements used the electoral arena to root and grow the party in territories where it was not present, was different. Even this formation did not at all mention the major foreign policy issues in its election campaign (and we know the limitations of many of these analyses on the international side) but it must be acknowledged that this experience is investing in a long-term objective, refusing to water down its experience in ideologically undefined enclosures in order to elect some parliamentarians.

Once again, the electoral ground proved to be the most difficult for communists and left-wing forces to build a political camp and class subjectivity. Others must be the forms and the ways, if you do not want to run the risk of chasing failures, election after election (and political box after political box), leading to new disappointments and desertions among the ranks of militants. For ten years, the Communists have been outside the parliamentary institutions and the diaspora has continued, despite some generous and important attempts of recomposition. Without a new vision and a long look, the risk is that of a competition for militants between the existing communists forces.

Finally, one of the most striking facts in these elections is that the people of the Left voted en masse for the M5S. The prevailing attitude is to consider this as a “right-wing” force with which not to engage. Nothing more wrong: the Communists must be able to talk and work on the contradictions that are evident within it, asking for respect for the programmes and commitments made with the voters and discussing the strategic issues of the fight against Euro-Atlantic integration and for the defence of the popular classes.

While we are writing this article, it is not clear what mandate the President of the Republic will assign for the formation of the government and what government will be formed. The situation is still very unstable.

1 Confindustria is the Italian Association of Industrials
2 Many left-wing militants have criticised Di Maio’s grammatical mistakes to show his inadequacy to become Prime Minister.